Beyond Survival: Engaging Communities on Coastal and Marine Management in Stung Hav, Preah Sihanouk, Cambodia 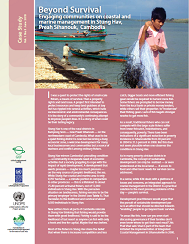 Following a series of discussions in 2006, a collaborative project with the Fishery Community, the Preah Sihanouk ICM Project and the UNDP GEF Small Grants Programme (SGP) was developed to address, the degradation of resources caused by overextraction of coastal and marine resources and the expansion of infrastructure for large-scale industries. The project was later expanded to cover the rehabilitation of the water supply reservoir, access to clean and safe drinking water and waste management. Over a three-year period, there were three separate but mutually reinforcing SGP projects implemented by the community. This case study documents the experiences of the three projects. It tells of a fishing community’s continuing effort to survive amid the challenges of uneven economic development and a changing climate.