Kep (formally known as Kep Province) is the smallest province of Cambodia covering 336 km2, with a population of 40,280. It is one of the newest Cambodian provinces, together with Pailin, Sihanoukville and Tboung Khmum, created by Royal Decree on 22 December 2008, which separated Kep municipality from the province of Kampot, as well as adjusting several provincial borders.
Kep has 16 km of sea coast on the southern side fronting the Gulf of Thailand and the Vietnamese island of Phu Quoc. The western limit is 20 km from the town of Kampot. The eastern limit is some 20 km from the Vietnamese border.
The Provincial Government of Kep has signed on Memorandum of Agreement on Scaling up the Implementation of the sustainable development strategy for the Seas of East Asia in Kep Province between PEMSEA and the Provincial Government of Kep on May 5, 2015. 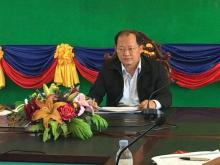 6.1 Reduce the proportion of untreated wastewater being discharged into drainage systems, rivers and coastal waters