Batangas City hosts an international seaport and the majority of the large industries in the province. Verde Island Passage, located between Batangas City and Mindoro Island, is considered to be center of the global center of marine biological diversity. Maricaban Island between Mabini and Tingloy is a priority dive site. Batangas Province initiated its ICM Program in 1994.

To date, 80 percent of the Province’s coastline has undergone coastal environmental profiling. 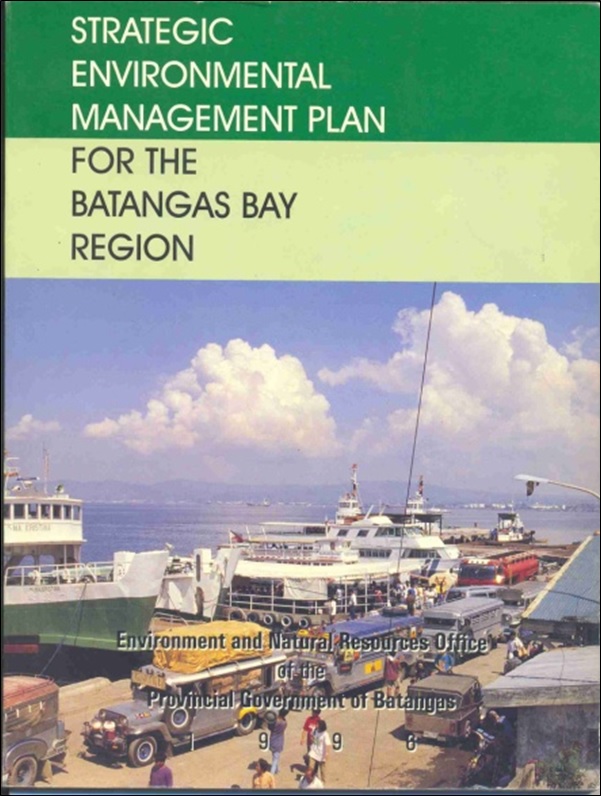 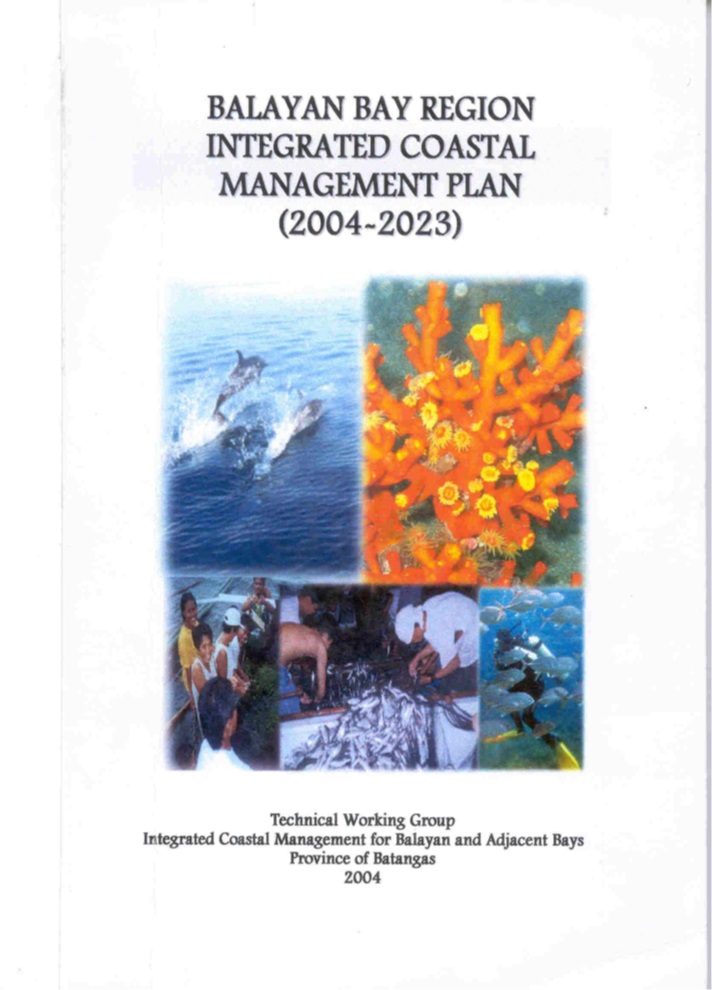 From the initial Strategic Environmental Management Plan (SEMP) developed in 1996 for the Batangas Bay Region, an SEMP covering the entire province has been developed and adopted.

005 Participation of Stakeholders in the Coordinating Mechanism

Most relevant sectors and stakeholders are represented in the multisectoral coordinating body for ICM implementation in Batangas Province.

Even in the absence of specific legislation for ICM, general and sectoral legislations supporting ICM goals and objectives have been enacted in the Province and in the coastal municipalities.

With respect to water use zoning, Mabini has enacted such regulation through Municipal Ordinance No. 4, 2006.

007 Administration and Monitoring of Compliance to Legislation

The compliance monitoring, inspection and enforcement of coastal regulations and policy is neither systematic nor coordinated across the province. The frequency of inspection and/or monitoring varies from the type of activity being monitored and from one municipality to another.

Active stakeholder participation contributes to the success of ICM programs because it creates ownership, thus sustaining support. The Provincial Government has progressed in passing down ownership of the coastal clean up activity to the coastal municipalities to ensure sustained participation in the activity.

The presence of active groups and organizations in the province implementing coastal management activities is of its advantage in achieving its sustainable development goals.

The enhancement of personnel skills is a continuing process. The training needs identified by the various municipalities can be considered and the capacity of the Provincial Government, as well as local experts, to provide the training must be determined.

015 Level of Preparedness for Disasters

The Provincial Disaster Coordinating Council (PDCC) of Batangas through the Provincial Assistance for Community Development (PACD) of the Batangas Provincial Government has developed a second edition Disaster Calamities and Preparedness Plan in the early 1990s, with the third edition currently being prepared. At the provincial level, all staff of the PACD have been oriented in disaster management.

016 Degree of Vulnerability to Disasters

017 Social and Economic Losses Due to Disasters

After reaching a high of 6 in 2000–2001, the number of incidences of oil and chemical spills has been declining. However, the largest single spillage since 1986 occurred in 2006 (more than one million liters) and 3 spills have occurred in 2008. Trends of deaths, people and property affected due to natural and man-made disasters are currently not available for local performance monitoring and plan adjustment.

The Strategic Environmental Management Plan (SEMP) for Batangas includes a component on habitat management.Given that the SEMP has been adopted by the Legislative Board, its Action Program 3 on Habitat Restoration and Management has also been adopted.

Coastal habitats in Calatagan are shown in Landsat images taken in 1990-1993 and 2003 (Figure 11, Abella in CI-Philippines 2007) but may not be conclusive to indicate trends. Anecdotal reports indicated a general decline in the mangrove areas of the Province due to conversion (e.g., fishponds).Currently, no assessment of areas of coral reefs has been conducted in the Province.

The numbers and area of marine protected areas (MPAs) in Batangas has been increasing since the first sanctuaries were declared in 1991. At present, there are 13 MPAs covering about 490 km² or 7 percent of municipal waters. Management effectiveness of the MPAs has been estimated (WWFPhilippines, 2007) as follows: 5 (58 ha) have been sustained (high), 6 (15.5 ha) are enforced (moderate), 3 (32 ha) are established (moderately low) and 2 (602 ha) have just been initiated (low).

Trends on the extent of reclamation and conversion activities in the Province of Batangas are not available. There are about five reclamation cases including the development of Batangas Port reported in the Province, of which four were filed in court (Calatagan). There were also reported reclamation in Mabini, San Juan and Tingloy. Five cases of mangrove areas converted to fishponds were reported in Calatagan. The reported reclaimed area totaled 144 ha excluding the 67 ha reported in Calatagan, which totaled both reclaimed and converted areas.

In Batangas, the static water level of the central municipalities from Calaca to Batangas City (but not including Mabini and Tingloy) are much deeper (i.e., greater than 40 m below ground surface and harder to reach). 77 percent of the area of the province is considered difficult for the purposes of well construction. However, there are no plans for the province or any of the coastal municipalities surveyed to assess water resources and plan for regulation and conservation of freshwater use.

The proportion of population in Batangas with access to an improved water source generally increased from 55 percent in 1990 to 97 percent in 2005.

024 Incidents/Deaths Due to Waterborne Diseases

Incidences of diarrhea and typhoid decreased slightly from 2000 to 2007. There is however an increase in the number of reported cases of amoebiasis.

Batangas’ fisheries management plan has been integrated into the Batangas Province SEMP 2005-2020. At the provincial level, coastal fisheries are managed by PGENRO and the Provincial Agriculture Office, with the former focused on conservation and protection of habitats and stocks, and the latter concerned with production (especially aquaculture and livelihood). The available data in this report however are inconclusive regarding an improving or declining trend in fisheries management.

Fishery production in Batangas from 1995 to 2007. Large fluctuations in the data and significant increases in both commercial and municipal fish are apparent for the years 2006 and 2007. Unfortunately, it cannot be determined whether the observed increasing municipal and commercial fish catch is related to changes in fish landing locations, changes in intensity of fishing effort, or changes in catch composition, since no information on the major fish species caught and catch per unit effort over time was available. Similarly, a steady increase in aquaculture production has been observed, which may be directly attributable to the reported conversion of mangrove areas into fish ponds.

While the absolute numbers of people employed, numbers of industrial establishments, and numbers of visiting tourists seems to have declined after a rise, unemployment rate and poverty incidence has risen as job generation has not been able to keep up with population growth. It is however difficult to assess the condition of the province with respect to this indicator and further validation is required.

It is recognized that the local governments have made significant efforts in developing strategies and action plans for pollution and solid waste management. Water quality monitoring has been sustained over the years and expanded to other bays in the province. The Batangas Province SEMP (2005–2020) identifies waste management as one of its action programs and covers municipal solid wastes, and industrial and agricultural wastes. 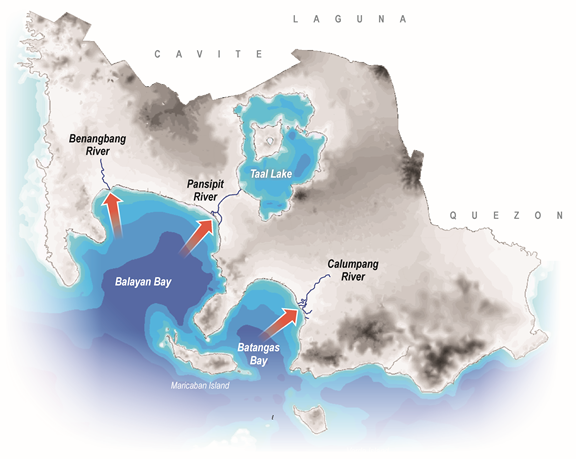 Results of the monitoring program indicate that total coliform and dissolved oxygen (DO) in Batangas Bay were within acceptable standards. Total coliform levels in some parts of Pansipit River, Benangbang River in Balayan, and in Calumpang River were well above standard on occasion, indicating the discharge of untreated domestic sewage and animal wastes to the rivers as the likely source of contamination. 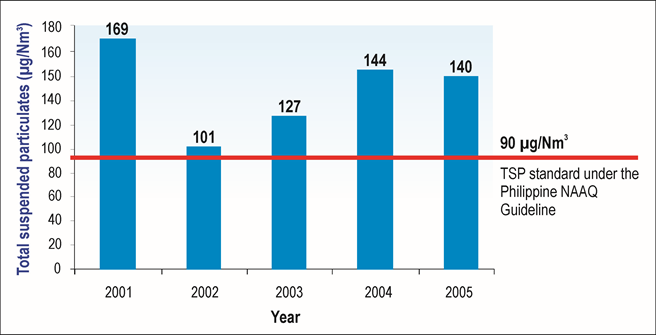 In Batangas City, from 2001 to 2005 levels of total suspended particulates (TSP) exceeded the Philippine National Ambient Air Quality Guideline (NAAQ) value of 90 μg/Nm3. The data on TSP levels is indicative only of the pollution levels in the vicinity where the monitoring stations were located (generally, located on roadsides) and do not represent the TSP concentration across the Province. 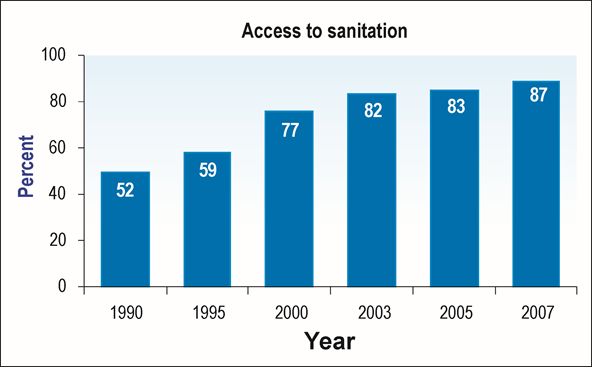 The proportion of households with access to sanitation increased from 52 percent in 1990 to 87 percent in 2007 (OPPDC, 2008). The 2007 data was based from the average of 21 priority municipalities for poverty diagnosis in the province.

Strategies for solid waste management have been identified but implementation of these strategies must be carried out as well as monitoring and evaluation of its implementation.