Home › E-Library › Integrated Coastal Zone Management in the People's Republic of China: An Assessment of Structural Impacts on Decision-Making Processes

Integrated Coastal Zone Management in the People's Republic of China: An Assessment of Structural Impacts on Decision-Making Processes 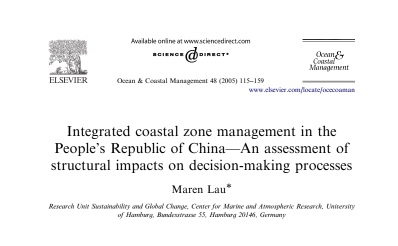 Integrated Coastal Zone Management (ICZM) forms a generally accepted concept to ensure sustainable development in the coastal zone. The implementation of the ICZM framework as formulated, e.g. by the World Coast Conference, is often constrained by the political system within which it should be applied. This is the case in the People's Republic of China. This study takes a political science perspective based on approaches inherent in neo-institutional and administrative theories. This way the relevant political structures are explained and the impacts that the transformation of the socio-economic system had on institutions are located. This is extended by the reflection of related political power distribution. This part of the analysis mainly contains existing knowledge on (integrated) CZM in China but evaluates it from a so far neglected point of view. The second part of the paper is taking the successful local ICZM approach of Xiamen and a proposed approach for Shanghai as an example to show that the adaptation of a working approach to other parts of the country is impossible without modifications to the organizational structures of decision-making and implementation. So far the literature emphasizes mostly modifications in content. An important reason for structural elements being comparably important is the choice of ICZM issues and the local power distribution. It furthermore shows that these are also the determining factors obstructing the upscaling of a local approach to the national level, a fact, which constrains the formulation of national guidelines in China and leaves only the bottom-up alternative of introducing ICZM to China—a hard task that leaves a disproportional responsibility to the local governmental level.