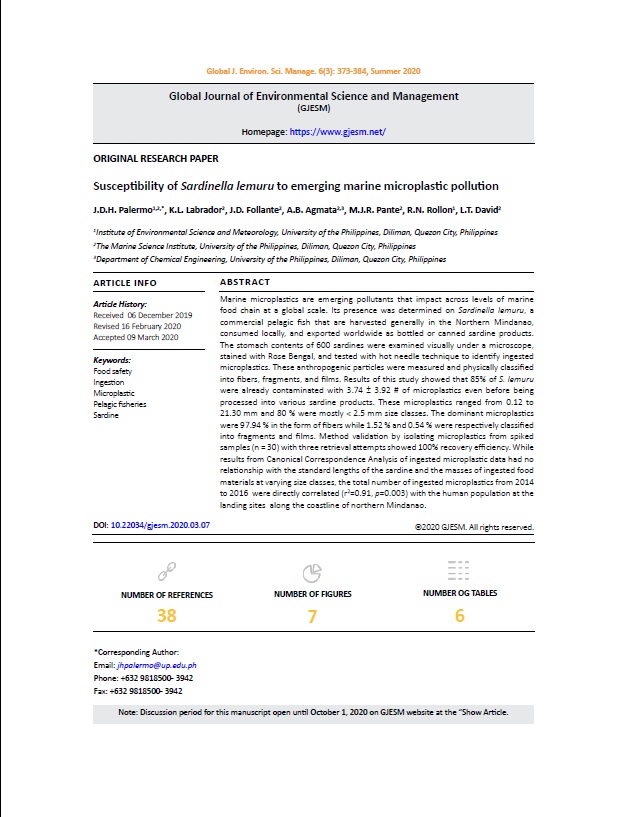 Download PDF Copy
Author(s):
J.D.H. Palermo, K.L. Labrador, J.D. Follante, A.B. Agmata, M.J.R. Pante, R.N. Rollon, L.T. David
Year:
2020
Location:
Philippines
Type of Resource:
Tools
Others
Marine microplastics are emerging pollutants that impact across levels of marine food chain at a global scale. Its presence was determined on Sardinella lemuru, a commercial pelagic fish that are harvested generally in the Northern Mindanao, consumed locally, and exported worldwide as bottled or canned sardine products. The stomach contents of 600 sardines were examined visually under a microscope, stained with Rose Bengal, and tested with hot needle technique to identify ingested microplastics. These anthropogenic particles were measured and physically classified into fibers, fragments, and films. Results of this study showed that 85% of S. lemuru were already contaminated with 3.74 ± 3.92 # of microplastics even before being processed into various sardine products. These microplastics ranged from 0.12 to 21.30 mm and 80 % were mostly < 2.5 mm size classes. The dominant microplastics were 97.94 % in the form of fibers while 1.52 % and 0.54 % were respectively classified into fragments and films. Method validation by isolating microplastics from spiked samples (n = 30) with three retrieval attempts showed 100% recovery efficiency. While results from Canonical Correspondence Analysis of ingested microplastic data had no relationship with the standard lengths of the sardine and the masses of ingested food materials at varying size classes, the total number of ingested microplastics from 2014 to 2016 were directly correlated (r2=0.91, p=0.003) with the human population at the landing sites along the coastline of northern Mindanao.
Topic:
Pollution Reduction and Waste Management
Pollution Reduction
Waste Management